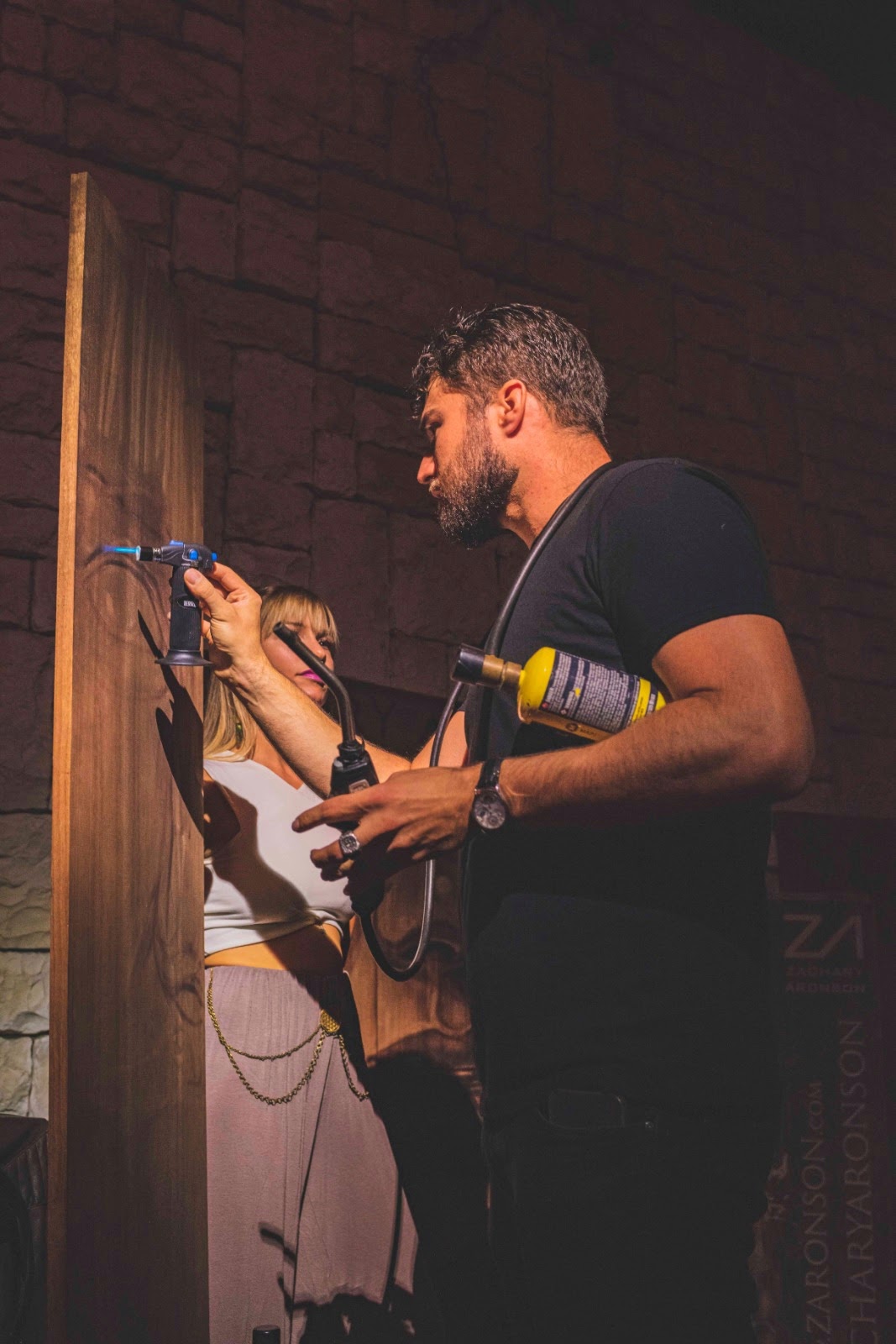 Using a blow torch or flamethrower on hardwoods to create portraits of aching beauty has become instinctive to Zachary Aronson, the world’s pioneer of the medium. Whether he is working in his Los Angeles studio, performing at live events, or showing his work in galleries, Zachary is at ease with fire, a traditionally destructive element that he has repurposed to paint thousands of pictures of intricate detail. His art has earned him the respect and admiration of his peers as well as his clients. It has been ten years since Zachary discovered the hidden potential of fire in art, and we sat down with him one afternoon to hear his thoughts on what it has been like to be the only artist to use fire to paint portraits.

“First, I still can’t believe it’s been a decade,” Zachary says, thinking back. “That definitely makes me think about all the time that has passed and how much my work has changed. It’s incredible how much I’ve been able to learn and to improve. You can see it when you compare my first work with what I am doing today. There are details today that I don’t think I would have thought were possible back then.”

Zachary continues by saying that some of his biggest challenges as a developer of painting portraits with fire came when he was a graduate student at CalArts. “That’s where I first began to explore fire as an artistic medium,” he remembers. “I was excited about developing this technique. I was sure of myself as an artist and knew that I was interested in portraiture, as I had always been. I wasn’t interested in becoming a different type of artist.”

Zachary reveals that he was initially discouraged when a few professors told him that he needed to do something different to be successful. “They suggested that I work with more conventional mediums because my projects were too different. There were, however, other professors who were supportive of my vision, and with their encouragement, I kept going. I ended up learning a lot from all of them, including the ones who advised me to try something different. I’m glad that I was able to do that as well as remain true to what I was interested in because both meant that I would grow into the artist I am today.”

The challenge for any artist, especially one who is creating a new medium, is to maintain their confidence no matter how the project is going. “My studio is full of thousands of pieces that turned out beautifully,” Zachary says, “but, yes, there have been a few that didn’t quite match the vision I had in my head. I call them my bloopers. Thankfully they are few and far between, especially these days now that I have developed control and so many techniques.”

Zachary laughs when he remembers a portrait he created for a celebrity at the Hollywood Improv, a famous comedy club in LA. “Look, I am a world-class artist, but I’ll just say it: I’ve done a few portraits that I would like to forget. This was one of them. It was early on in my live art career. There was a fundraiser at the Improv, and I did a portrait of one of the comedians from the show. 100 people were watching me.”

45 minutes into it, Zachary knew it wasn’t going well. “The comedian was a wonderful person, but she was talking and moving the whole time. It was dark outside, and the lighting was terrible. I thought, ‘I will never take a photo of this, and this is not what I am used to doing.’ Finally, I just finished it and gave it to her, not wanting to hear her reaction.”

Zachary laughs again. “She was blown away. She loved it. I had so many people tell me that I was so talented and that it was the most amazing thing they had ever seen. I thought, ‘Really? This? You should see what I can do when I’m on my game!’”

He thinks he learned a lot from that experience. “It gave me so much confidence that even when I have an off day, which everyone does no matter how good they become, I can put on an incredible show and share my talent with people.”

Zachary believes the experience was ultimately very positive and helped him to focus on what he cherishes: the gift of sharing his uniqueness with other people and of showing them that something they’ve never even experienced is actually possible.

The most important thing Zachary has learned from his pioneer journey is to trust himself. “Every day is different when you’re an artist, especially when you’re going where no one else has stepped,” he says. “My skills are growing, but I learn something new about fire each time I paint a portrait, whether that’s in my studio or at an event. I come to the wood with my skills and my vision, and fire meets me there, ready to take me deeper into my relationship with it. That’s where the beauty is, I believe – that moment when we meet and collaborate to create art that no one has ever seen.”

For more information on Zachary Aronson and his master ability to paint portraits using only fire and to transform large spaces into otherworldly realms, please see his social media pages: